Home The Art Of Prayer The Right Attitude to Prayer

The Right Attitude to Prayer

Written and Published On January 28, 2019
The Art Of Prayer 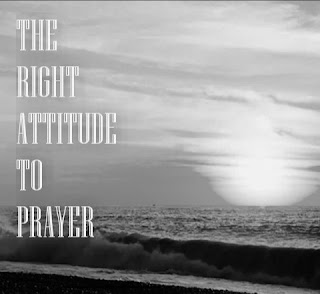 How comes you're still wallowing in the very predicament which you have being praying about?
Why does it seem as though God is distant from you and deaf to your cries?

There are a couple of reasons with which the above questions can be answered. The reason I would sharing today is based on our attitude to prayer.

One of the reasons why our prayers go unanswered is due to the way we pray. Our attitude towards prayer must obey certain principles else prayer would be nothing but an unfruitful venture.

I would be showing you three(3) factors that make up the right attitude and approach to prayer.

With these factors in place you can not have an ineffective prayer life. No! It is simply not possible.

".... for he that cometh to God must believe that he is, and that he is a rewarder of them that diligently seek him." – Hebrews 11:6b

Anyone who must come to God must be aware that God rewards all who seek Him and not just seek Him, seek Him diligently.

If your prayers will bear any effect then you must mingle your prayers with diligence. God does not respond to just anyone who calls upon Him. He responds to only those who seek His face diligently.

Diligence is defined as being conscientious and determined or persevering when doing something.

The only time God is compelled to show Himself to anyone who seeks Him is when that person seeks Him with diligence.

God is not moved by fine-sounding or fluent ongues neither is He moved by tears and wailing but by prayers mixed with diligence.

"And he spake a parable unto them to this end, that men ought always to pray, and not to faint;
saying, There was in a city a judge, which feared not God, neither regarded man:
And there was a widow in that city; and she came unto him, saying, Avenge me of mine adversary.
And he would not for a while: but afterward he said within himself, Though I fear not God, nor regard man;
Yet because this widow troubleth me, I will avenge her, lest by her continual coming she weary me." – Luke 18:1-5

Jesus in the text above used an entire parable to emphasize that "men ought ALWAYS to pray and not to faint". He was trying to show us that prayer is not viable without persistence.

The Overly Neglected Ingredient For Attracting Answers to Prayers

The judge in our text as Jesus made us believe was one who neither feared God nor regarded men. He was under no obligation to grant the widow justice but because of the widow's persistent plea for justice, the judge had no option than to grant it to her.

In verse 7 of Luke 18, Jesus says;
"And shall not God avenge his own elect, which cry day and night unto him, though he bear long with them?"

God may delay to act. He may allow that predicament to go on for a little while but He expects that you continue to call on His name regardless of what looks like His delay.

Like the father of Martin Luther King (Jnr), Luther King asserts "pray and let God worry" you just need to keep on praying. Just pray and allow God to do but the paperwork and the main work.

The widow in Luke 18 would never have gotten justice if she didn't persistently seek for it. Even when it seems like that which you're praying for will not happen just keep on praying.

God is not handicapped to respond to our prayers. He is not wicked nor is He unable to answer us when we call. He is just waiting to see a persistent flow of prayers.

"To get the best out of your prayer time, you must know what you want and come before God desperately" – Brodrick Emmanuel Ebube

There are about 3000+ promises in the Bible and all of these promises have got an attached command. God would always say "if you do this, I will do this"

One of such promises is found in our point's text – Deuteronomy 4:29
The scripture text can be inverted thus;
To find God, you would have to seek Him and seek Him with all your heart and soul – that's desperation.

Maintaining The Fire of Corporate Prayers

When Jesus was on earth, prayer was simply about meeting with Jesus. People met Jesus to learn about God (Nicodemus, The Rich Youngman e.t.c), others met Jesus to be healed (Blind Bartimaeus, The ten lepers, Jairus, The Centurion e.t.c) and so on all of these was what prayers was about since Jesus was here on earth and could be accessed by physical interaction.

In Matthew 15, we see a desperate Canaanite woman;

At a point this woman who have said "can you imagine this Jesus, calling me a dog, who does He think He is, Rubbish!" and she would be robbed of healing.

But being desperate, she never allowed the hurtful words of Jesus deter her. She had a clear vision of what she wanted and not even Jesus could stop her from getting it.

Some of us take prayers to be a religious function or activity. To get the best out of your prayer time, you must get a picture of what you want and come before God in prayers desperately.

You can move your prayer life from being boring, unexciting, uninteresting, unfruitful,and ineffective to being very effective, powerful, and exciting. The key lies in this right attitude to prayers.