Why Your Prayers Seem Not To Be Yielding Results

Written and Published On March 26, 2019
The Art Of Prayer 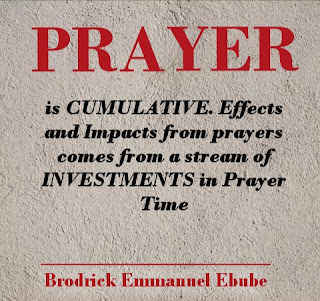 "Prayer is not something you start doing now and find worthy effect. Effects and impacts from prayers comes from a stream of investments in prayer time." – Brodrick Emmanuel Ebube

Severally, the thought of being prayerful without any palpable result leads to majority of the backsliding and decline in fervency which seems to be ravaging the Body of Christ.

The idea of praying gradually becomes sidelined overtime in the life of a person who seems not to be getting even the tinniest amount of responses for his/her prayers.

We've listened to and sat under so many ministrations targeted at revealing the immense benefits which are derivatives from the technology of prayer yet these "teachings" to many are but myths and legends.

Why is it so? What do we seem to be missing in our prayer walk? Why are we not yielding palpable results from our times and sessions of prayer?

Today, By His grace, I am going to be exposing one of the reasons why we have not yielded effects from our prayer sessions. The reason we are have not been able to trap palpable responses and results from heaven as I would be sharing is encapsulated in the concept of the cumulative nature of prayer.

The Cumulative Nature of Prayer

Prayer is never a fire brigade function to orchestrate quickly that which you desire. Many believers do not pray until they are face to face with life-threatening challenges.

Such an approach to prayer is a wrong one. If you pray only when you figure you need divine intervention you're completely wrong!

Prayer is not something you start doing now and expect to find worthy effect. Effects and impacts from prayers comes from a stream of prayer investments.

Praying only when there's a dire need of urgent intervention would not yield sustainable and substantial results because prayer is a cumulative function.

"And when he had taken the book, the four beasts and four and twenty elders fell down before the Lamb, having every one of them harps, and golden vials full of odors, which are the prayers of saints." – Revelation 5:8

John reveals to us the storability of prayers. Prayers can be stored. In the same way we save money in the bank, we save prayers in golden vials.

Over every issue there is a golden vial for storing your prayers on that issue and until that golden vial is filled up, God is not compelled to act on that case.

If a vial by God's jurisdiction should take ten (10) hours of prayers to fill, your thirty (30) minutes fire-brigade cry would not solve that issue, would it?

Let me use a more relatable analogy. Suppose you have a debt of $10,000 and all you have in your bank account is $1,000 can you pay up that debt? No way!
To be able to pay the $10,000 debt you must have saved up to that amount in your account already.

God would be handicapped to act over an issue until the vial for that issue has been filled up with prayers.
The degree of results you command is the decree to which your prayers have filled up your golden vials.

So, the problem is not with God or your inability to articulate the right prayer language but because your prayer time is not sufficient enough for God to act.

Instead of feeling bad that God has refused to answer your prayers or consider losing your fervency of service to Him, brace up because it is a challenge to pray more.

Your prayers are not yielding results because they've not been accumulated sufficiently enough to bring about the results you desire.

God is not a tyrant. God is not wicked. You can't seek God and not find Him. You can't ask Him for bread and He gives you stones. He is a loving God ready and willing to answer His own when they call.

Do not be discouraged! Just PRAY MORE!!