Home The Art Of Prayer What is The Believer's Lifestyle and Culture?

What is The Believer's Lifestyle and Culture? 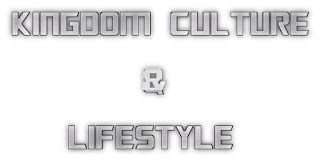 “Who hath delivered us from the power of darkness, and hath translated us into the kingdom of his dear Son:” — Colossians 1:13

SINCE WE HAVE BEEN DELIVERED FROM THE POWER OF DARKNESS AND HAVE BEEN TRANSLATED INTO THE KINGDOM OF JESUS CHRIST, HOW DO WE LIVE?
WHAT IS THE CULTURE OF THE PEOPLE OF THIS KINGDOM AND HOW SHOULD WE LIVE IT?


In the anchor scripture text above, Apostle Paul made us to understand that we were formally held captive in the kingdom of darkness but by the substitutionary sacrifice of Jesus, we have been delivered from the power of darkness and have been translated into a new kingdom.


This new kingdom which we now belong to has got a culture and a lifestyle. It has principles and precepts which every member of the kingdom must abide by. It is inappropriate and unacceptable to live your life in opposition to the predetermined way of life of this kingdom.


When somebody say a missionary or a business man seeking new grounds to expand his business goes to a new territory, the first thing they are expected to do is to visit the King or the ruler of that place and then make inquiries as touching the people's culture, the do's of the kingdom as well as the don't.


In the same vein, as believers who have been translated from a kingdom where we once operated from to a new kingdom, it expedient to seek to know what is obtainable in this new kingdom.


Every believer must thrive to know how he ought to live, conduct him/herself, talk e.t.c without going against the principles of this new kingdom.


You will be vulnerable when you live in a kingdom and go against the principles of that kingdom. Security in any territory is predicated on abiding by the custom of the territory and the kingdom of God is not an exception.


The necessity of knowing and understanding the culture and custom of our kingdom was what Jesus was trying to communicate in Matthew 6:33


“But seek ye first the kingdom of God, and his righteousness; and all these things shall be added unto you.”


We must seek to fully establish the kingdom of God on the earth and also to learn the ways of the kingdom.


And so, whenever Jesus taught, He tried to show us a principle in the kingdom. Anytime He spoke, one major goals was to relate to us the lifestyle expected of us as members of this kingdom. His teachings were characterized with expositions on the principles and way of life of the kingdom.


In Luke 18, Jesus began in His usual custom to teach with a parable how the people of His kingdom should live. He taught that there was a certain widow who went to a judge that neither feared God nor man for justice.


This judge although wicked and not a respecter of persons obliged to giving her justice because of her consistent coming. In verse 5 of Luke 18 the unjust judge said "Yet because this widow troubleth me, I will avenge her, lest by her continual coming she weary me.”


We have interpreted these parable contextually. Relating it to the cummulative nature of prayers and why we must pray consistently. But Jesus was not just showing us how to get God to answer our prayers. He was showing us how to live in this kingdom.


See what the first verse of Luke 18 says:

“And he spake a parable unto them to this end, THAT MEN OUGHT ALWAYS TO PRAY, and not to faint;”

Read it again and notice the capitalized words!


PRAYER IS OUR CULTURE AS BELIEVERS

We were taught in elementary school that culture is the total way of life of a people. So when I say prayer is our culture as believers I mean prayer is how we must live our lives.


The main goal of the parable Jesus told us in Luke 18 is not on the widow or the judge. It is a revelation of our culture as believers. It is the way of life in this new kingdom.


As long as you are a man, prayer must be a way of life for you. Muslims must pray five Ra'kah prayers everyday. For them that's the way of life. No matter how busy a man is, once it is time for prayer, he will suspend whatever he is doing. He may even be transacting with you but the moment he hears the call to pray, you're immediately placed on pending.


The culture and principles of a kingdom is superior to feelings and desire of any member of that kingdom. So it does not matter how you feel about the culture of that kingdom, if you must matter in that kingdom you must live in accordance with the kingdom's culture.


PRAYER IS NOT FOR EMERGENCY OR RISK MANAGEMENT


Most of the times when Luke 18 is used in a sermon, it is usually to connote that prayer is a tool for emergencies and risk management.


But you see, if the widow had established a good relationship with the judge before the case came up, she would not need to beg him so much before he would give her judgement.


It is saddening that many believers see prayer as a tool for managing emergencies. When an emergency shows up that is when we remember to pray. We have reduced prayer from what it was intended to be to what our fleshy desires want it to be.


The truth is this, prayer was not designed by God to serve your desires. Prayer was crafted by God as a means of communing with man and having His will and kingdom imposed on the Earth. Your will is not relevant in prayer until the will of God has been captured in that prayer enterprise.


This is why we pray and our prayers do not produce results. We are praying to manage emergencies or get our needs met at the expense of God's own needs. The true form of prayer is not for emergency management but for kingdom business.


If you pray only when you have a need or when the devil has struck, your life will perpetually remain under the subjugation of the devil and you will amount to your least potential in life.


Do not wait for a situation to rise before you pray. Start praying now to avert that situation. I feel like saying this again:

Do not wait for a situation to rise before you pray. Start praying now to avert that situation.

Build a relationship with the just judge of the universe by prayer and watch Him keep the devil and his activities away from you.


PRAYER IS FOR EVERY MEMBER OF THE KINGDOM


There was a time when I started out praying very fervently. I could pray for hours and not get tired. My family and friends began to nickname me "Pastor". Someone even said he would not be surprised if after my National Diploma, I dropped Western education for Bible School.


All of that stems from a mentality. A mentality that prayer is for those who want to be pastors and all that. But that's a wrong mentality. Prayer is not for men of God alone but for every member of this kingdom. It is not an activity for preachers only.


This mentality is one of the reasons why believers do not pray. Prayer in their shallow minds is for those who have been called by God. I pray that God rids you off that mindset if you possess it.


The prologue before the parable in Luke 18 says that "Men ought always to pray". The Bible uses man or men generically. So when you see the word "man" or "men" except it is clearly specified it refers to both men and women.


So, men ought always to pray implies that every one who is a human must pray. As long as you are a human, prayer must be your way of life.


Prayer is not for a particular group of people. It is supposed to be our lifestyle as believers. Begin to engage God in prayers and watch the tremendous shift your life will experience. Do not wait until there's a situation, pray before the situation comes.


Tell me what you got from this article by commenting in the comment section. I really want to hear from you. God bless you as you comment.

Prayer is a culture of the kingdom we now belong to: the kingdom of God.
God bless you sir

Oh Yes! Bless you too