The Man which God Uses 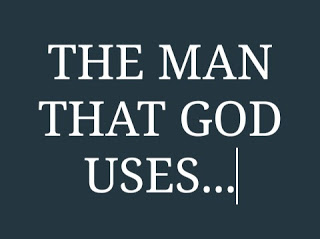 Who is the man that God uses?What makes up the man that God will make use of? What is the posture a man must take to be a readily useful vessel for the service of the Master?God even though He is sovereign is limited in His operations on the earth. This is because He has willed the earth to men and has apportioned it as a territory to be dominated by man.The Psalmist in Psalms 115:16 said:"The heaven, even the heavens, are the LORD'S: but the earth hath He given to the children of men."Furthermore in Psalms 8:6-8:"For thou hast made him a little lower than the angels, and hast crowned him with glory and honour.
Thou madest him to have dominion over the works of thy hands; thou hast put all things under his feet:All sheep and oxen, yea, and the beasts of the field;The fowl of the air, and the fish of the sea, and whatsoever passeth through the paths of the seas."The heaven is the place of God's complete sovereignty while the earth is man's domain.
For God to do anything on the earth, He must find a man who would serve as His excuse or permission. Before God can do anything on the earth somebody must act as an intermediary allowing God to find expression on the earth.There is great suffering in the world today not because God is a tyrant or because He is incapacitated to intervene. It is because men have not yielded themselves as excuses for God to act. The problem has never been God but the lack of yielded men.“And I sought for a man among them, that should make up the hedge, and stand in the gap before me for the land, that I should not destroy it: but I found none.” – Ezekiel 22:30God is always seeking for men who would stand in the gap. If God decides to act without the excuse of man, He would be violating the law that governs territories.Inasmuch as God needs men to carry out His purposes on the earth, there are clear cut characteristics of the man God uses. Men are God's methodology for operating in the earth but not every man is handy for God's usage.To use a man, God has to work on that man, making sure that man bears a posture, is rid of certain tendencies and meet God's usability requirements. Our task is to identify these requirements and work on ourselves till we become God's tool for enforcing God's kingdom and will.
From scriptures and the lives of men who God have used in times past, we can draw out the requirements for the men that God uses.

In God's dealing with man the first thing He seeks to work on is the man's heart. The heart is the pivot of every man's life and whatever rules the heart rules the man.This is why Solomon admonished in Proverbs 4:12, Keep your heart with all diligence for out of it are the issues of lifeIn Ezekiel chapter 14, certain elders came to inquire of the Lord through the Prophet Ezekiel and God gave the prophet a shocking revelation. God said:“Son of man, these men have set up their idols in their heart, and put the stumblingblock of their iniquity before their face: should I be enquired of at all by them?” – Ezekiel 14:3God could speak to the Prophet Ezekiel because he was the only one with a pure heart in the gathering. The elders had placed idols in their heart and put the stumbling block of their iniquities before their face.This is why the Psalmist prayed saying:“Create in me a clean heart, O God; and renew a right spirit within me.” – Psalms 51:10David knew that The LORD is nigh unto them that are of a broken-heart; and saveth such as be of a contrite spirit (Psalms 34:18).Once the heart of a man is corrupted, that man becomes unusable by God. Sin, pride, ambitions e.t.c corrupt the heart and if a man must be used of God, he must rid himself of these.Like David we must pray thus:"Search me, O God, and know my heart: try me, and know my thoughts:
And see if there be any wicked way in me, and lead me in the way everlasting." – Psalms 139:23-24

2. A Man Who Is Totally Surrendered To God.

God uses only willing vessels. God has no favourites in the kingdom. Any man who would be totally surrendered to God can be used of and by God. Even the man who has been written off by society, if he be surrendered totally to God can be used to wrought marvelous deeds.To surrender is to let go of ambitions, aspirations, goals, desires that are aimed at generating a fleshy sense of fulfilment. The man that God would be used by God is that man who has taken his eyes off the world and the momentary pleasures the world can afford and has fixed his gaze on the master.“And when he had called the people unto him with his disciples also, he said unto them, Whosoever will come after me, let him deny himself, and take up his cross, and follow me.” – Mark 8:34The man God will use is the man who denies himself, picks up his cross and fixes his gaze on the master. Such a man is not concerned about being the richest man on the world or driving the latest Benz or building an edifice but on enforcing the will of God.

3. A Lover of His Presence

In his letter to the church in Philippi, Apostle Paul wrote the words below:"That I may know him, and the power of his resurrection, and the fellowship of his sufferings, being made conformable unto his death;Brethren, I count not myself to have apprehended: but this one thing I do, forgetting those things which are behind, and reaching forth unto those things which are before,I press toward the mark for the prize of the high calling of God in Christ Jesus." – Philippians 3:10,13-14This was a man who is reckoned to be one of the greatest apostle of Bible times.This was a man who was caught up in the third heavens and saw things unspeakable.This was a man whose writings were some how difficult even for the self-ordained leader of the early church, Apostle Peter, to understand.This was a man who got bitten by a viper and everyone expected him to die instantly but he simply shook the serpent into the fire and continued living.
This was a man from whom handkerchiefs went out to perform miracles.Yet he still wanted to know God. He did not count himself to have achieved anything despite his amazing and elaborate profile. He still pressed to know God. He was a man who loved the presence of God.The man that God uses is not a man who visits the secret place but a man who dwells there. God can only use a man to the degree of the knowledge of God the man has. The more of God a man knows the more useable he becomes.The knowledge of God is not gotten by impartation but in the secret place of the Most High which is the academic facility of Heaven. Men who have been used by God have shown intense love for the presence of God and they dwell there.Abraham would rise early in the morning and go to the place where he stood before the LORD (Gen 19:27). Moses would stay forty days and night on Mount Sinai talking with God (Exodus 34:28).Elijah was able to make bold declarations because he stood before the LORD (1 Kings 17:1). David never lost a battle because he was always seeking the Lord like the deer seeks for water (Psalms 42:1). Jesus would rise a great while before daybreak and go to a solitary place and pray (Mark 1:35).
No man can be used by God who does not stay in His presence. In the presence of God, the secret place, God reveals His secrets to men. The presence of God is the greatest asset of the man of God because it is the place of renewal, rejuvenation and revival. Only men who loves and dwell in the presence of God can be used by God.Dearly beloved, become God's excuse in your family, generation and the world. Become the man that God will use to enthrone and enforce His kingdom, principles, will, and culture on the earth to the end that the earth becomes an extension of heaven.Stop giving the devil a foothold. Avail yourself as a tool for God's use. Master the points listed in this article.KEY TAKEAWAYS
1.God is handicapped Without  man because man is His methodology.
2.The man God uses is a man with a pure heart, who is surrendered to Him totally, one who loves and dwells in His presence
m3.Noan can be used by God who does not stay in His presence.